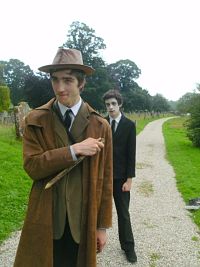 Van Helsinki is an amateur horedy (comedy/horror) film created, written, directed and partially filmed by Matthew Edwards. An odd blend of semi-surrealism and plain student-film styles, Van Helsinki tells the story of the eponymous character, Van Helsinki, a hard-bitten ex-cop who is hunting his arch-nemesis, the Vampire named Geoff Vampire. Along for the ride are Fay Løren, a beautiful girl with a mysterious past, and Svetlana, Man, Jim and Woman, civilians caught up in the madness. Backed up by his ex-collegues Inspector Someone-Who-Is-Not-David-Bowie and Professor Ford, Van uses all his skill and craziness to deal with Geoff.

Van Helsinki was screened in Penrith Cinema on Friday 13th September 2013, and will be available on DVD sometime during 2014...perhaps.