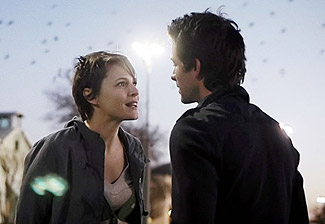 After he had lain still there about an hour he heard a low and seemingly very distant sound, but singularly grand and impressive, unlike anything he had ever heard, gradually swelling and increasing as if it would have a universal and memorable ending, a sullen rush and roar, which seemed to him all at once like the sound of a vast body of fowl coming in to settle there, and, seizing his gun, he started up in haste and excited; but he found, to his surprise, that the whole body of the ice had started while he lay there, and drifted in to the shore, and the sound he had heard was made by its edge grating on the shore- at first gently nibbled and crumbled off, but at length heaving up and scattering its wrecks along the island to a considerable height before it came to a standstill.
—Walden, Henry David Thoreau
Advertisement:

Upstream Color is a 2013 independent film written, directed, and scored by Shane Carruth. This is his long-anticipated sophomore film following the 2004 cult hit Primer. Much like that film, it was made on a small budget (~$50,000) with Carruth taking a large role in the production.

The film follows Kris, a graphic designer who is drugged by a small-time thief and has her life flipped upside-down because of it. She later has a chance meeting with a man named Jeff, who has a similar story. Unbeknownst to the two of them, they are caught in the metaphysical life-cycle of an ageless organism, traveling through "the microscopic world, moving to nematodes, plant life, livestock, and back again", and begin mirroring its actions.