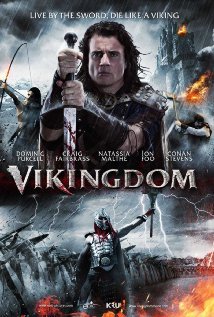 Vikingdom is a 2013 fantasy movie directed by Yusry A. Halim and starring Dominic Purcell and Natassia Malthe. Set in the Middle Ages when the Nordic people were slowly abandoning their old religion in place for Christianity, Thor the God of Thunder is outraged that mankind has forsaken them and sets out to merge Midgard, Vallhala and Hellheim as punishment by gathering mythic relics and use them before the Blood Eclipse takes place. Eirick, an recently-murdered Norse king who was brought back to life by the goddess Freyja, is tasked with stopping Thor from succeeding and he must form a group of companions to help him venture into the underworld (where none of the gods may enter - only the undead like Eirick himself) to find the Horn of Hel that can banish Thor once its blown.