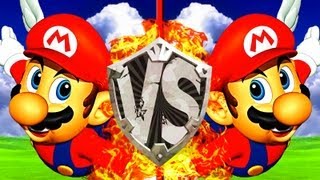 Tyler: Hey everybody and welcome back to Super Mario Sunshine Versus! I'm AttackingTucans!
Josh: And I'm Josh Jepson.
Tyler: And this time, we're gonna get our vaginas pierced!
Advertisement:

is a YouTube Let's Play channel. It features a competitive, co-commentary series of Let's Plays of various games, primarily between JoshJepson and Tyler Sederwall (formerly known as AttackingTucans). The two race through the games, sometimes with specific sub-rules for each game (get all the blue coins in Mario Sunshine, get the Gold Skulltulas in Zelda, and so on), usually attempting 100% Completion. A heads-up display will keep track of each player's scores and progress as they play together. All the while they play word games, exchange stories, and discuss the finer points of vocabulary and music- with Tyler slipping in off-color jokes and Josh running the gamut of reactions.

(a.k.a., "Project Stingray") was the first in this series of races, hosted on Tyler's channel before the Versus channel was created. Tyler's channel later hosted a new Versus series, wherein he raced Donnabellez through Super Mario Galaxy, and on Josh's channel, he hosted Luigi's Mansion Versus, which he confirmed via Twitter.

Finally, on February 2, 2013, Tyler and Josh announced their own channel and an official name for their collective versus, "Project Rivals". With this new channel, they also announced its first versus, Super Mario 64. Now on this channel, Josh, Tyler, and sometimes a different player will compete to see who can complete games faster, with multiple races going on at once, and the occasional one-off versus for a shorter, quicker game. In 2017, they started doing live Versus races as well* They had done a livestreamed 24-hour race of The Legend of Zelda: Ocarina of Time Master Quest some time prior, but that was long before it became a frequent thing, with the streams being moderately edited and uploaded to their channel like any other series; the live status allows for real time viewer interaction at the cost of not being able to practice between episodes.

Viewers are sometimes invited to play along and post their experience on YouTube. For both the two players and the viewers, segments had to be no longer than a half hour. However, for a few episodes, they went over by a few minutes, and they allowed their viewers to go over as well. The guideline or even existence of community interaction varies with each race.

They also have a website that was eventually abandoned. Here's a link to it.

On June 9th 2020, Tyler announced that he and Josh would be going seperate directions, Josh no longer helping run the Versus series.

Not to be confused with Achievement Hunter's Let's Play series of the same name (which is officially spelled VS), or the film Versus.

The various Versus LPs contain examples of the following tropes:

Main Versus (Tyler vs. Josh)

I Wanna Be The Guy