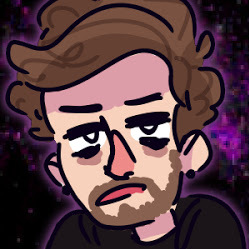 I've not seen such bravery!
— The old opening to his videos
Advertisement:

, is a video game reviewer on YouTube and (formerly) a part of the (now-defunct) Hidden Block collective. He does reviews mostly of PC titles, though he occasionally does console games too. His style is more relaxed than most of the other comedic video game reviewers on YouTube with a notably more informative direction, although he does mostly do it for the humor. He has since branched out to include reviews of old movies, videos, TV shows, recipes and frozen meals—anything with a retro or nostalgic charm, really.

He also does occasional Top 5 videos, which are usually his top 5 games for a certain category plus a guest pick, and the Lightning Round, where he only gets two minutes to review a game.

In 2016, he started a new show called Televoid! In this show, Ian reviews old television shows and instructional videos under the framework of an Ontological Mystery, in which he slowly realizes that he doesn't remember how he got to this location, and that someone/something is watching him and preventing his escape.

In 2017, the surprising success of his Kid Cuisine video spawned the Brutalfoods series, in which he reviews frozen meals or prepares recipes from old cookbooks he finds interesting.

In 2019, Ian started a series of videos showcasing various arcade games including coin pushers and crane games and introduced his new cat companion MJ who frequently features in Ian's streaming channel as well as the occasional video on the main channel.

He does occasional streams on his Twitch channel

where he uploads original music and stream archives.

Caddy finds a letter from Brutalmoose that demands he play a terrible video game so he can get his stuff back. Turns out, Ian has god-like powers and can tell what Caddy will say and when.

Example of:
The Tape Knew You Would Say That

Caddy finds a letter from Brutalmoose that demands he play a terrible video game so he can get his stuff back. Turns out, Ian has god-like powers and can tell what Caddy will say and when.