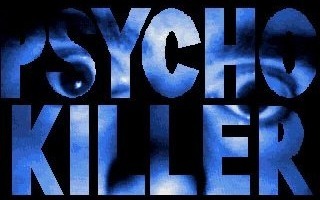 Once upon a time there was a man who heard strange voices...
Advertisement:

Psycho Killer is a video game on the Commodore Amiga CDTV and MS DOS, released in 1992, developed by Delta 4 Interactive and published by On-Line Entertaiment, the same people who brought us The Town with No Name.

The game's plot is simple. A woman goes into a car and drives, but suddenly runs into the titular killer. The protagonist also goes driving, but her car blocks the road and he has to stop. After that, we see the woman being kidnapped by the psycho, and our hero goes into the woods to save her.

The game plays like a Point-and-Click Adventure Game, you have to use the directional pad to move the pointer, pick a direction (left, up or right) and see as FMVs happen. Sometimes it's necessary to click something in time, for example to stop the car or defend yourself from the eponymous killer.

A sequel was planned, and apparently it would be "all in your mind", but it was never released.

Not to be confused with the Talking Heads song.