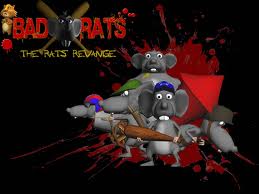 Well, they got the "bad" part right...
Bad Rats: The Rats' Revenge is a physics based Puzzle Game made by Invent4 Entertainment. The player must place various pieces of junk along with the eponymous rats to construct a Rube Goldberg Machine with the goal of setting off a Death Trap and murdering a cat, presumably as revenge for some past grievance.
Advertisement:

It was the first Brazilian game to be published on Steam. Due to its So Bad, It's Good consensus, it got a sequel named Bad Rats Show, released in June 2016.