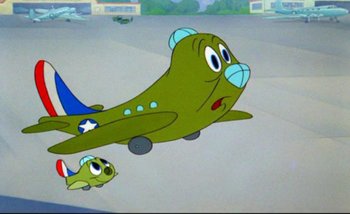 Little Johnny Jet is a 1953 animated short film (6 1/2 minutes) directed by Tex Avery, one of the Tex Avery MGM Cartoons.

An anthropomorphic B-29 Superfortress named John is struggling to find work: Despite being a (very) decorated veteran of "the War", the military and civil aviation industries are more interested in the revolutionary new jet-engined aircraft than than an "old" propeller plane like himself. As a consequence he really hates jets. Thus he is appalled when the stork delivers to him and his wife Mary (a DC-3) a little baby boy jet. The fact that Junior at birth can fly way faster than his dad makes John hate the boy even more.

One day John, who still can't find work and has "another propeller to feed", reads a trade paper article about an around-the-world race, the winner of which will receive a fat government contract. Determined to prove himself, he enters the race—with little Junior stowed away in his passenger compartment.