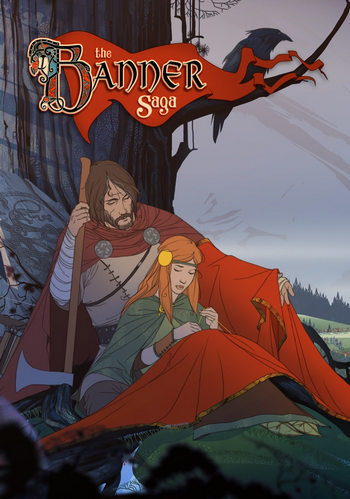 Only the sun has stopped.
The gods are dead.

In their wake, man and giant
survived through a tenuous
alliance, driving black
destroyers called dredge deep
into the northern wastes.

Now is an era of growth
and trade. Life goes on.

Only one thing has stopped.
The sun.
Advertisement:

The Banner Saga is a tactical RPG developed by Stoic Studios. It is a series of tales set in a fantasy north, where humans struggle to coexist with the varl, a race of horned giants. They live in the shadow of a race of armored beings known as the Dredge, forcing them into an uneasy alliance. One day, the Dredge attack again, threatening all of mortal civilization.

The game can be described as a mixture of Western RPGs, tactical RPGs and The Oregon Trail. Although the focus is on RPG elements, the choices the player makes (including difficult moral ones) can have a large effect on the story.

There is also a free-to-play spinoff named The Banner Saga: Factions focused entirely on player-versus-player combat.

A sequel, The Banner Saga 2 has been released as of April 19, 2016. The final game in the trilogy, The Banner Saga 3 was Kickstarted and was later released on July 26, 2018. Stoic has also said that if the trilogy is successful, they might make more games in the setting.