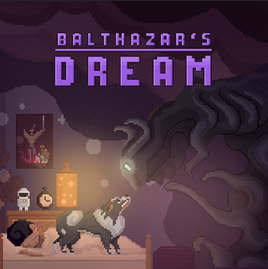 'Balthazar's Dream is a Platform Game by Psilocybe Games.

Balthazar is a dog whose best friend, a young boy named Dustin, has fallen into a coma after being hit by an ice cream truck. While Dustin lies in bed, Balthazar refuses to leave his side, even sleeping by him. While Balthazar sleeps, he dreams he's in some strange world, in which he senses two presences. One is Dustin, but the other is something dark and evil, and Balthazar just knows that whatever it is, it seeks to take Dustin away.

So, his goal set, Balthazar sets out on a quest to save Dustin from this threat.