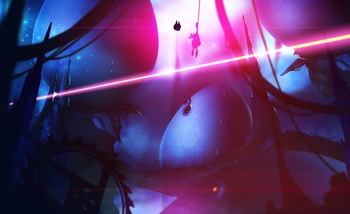 Hang in there Rabbit
"I enjoy Badland for its simplicity of control and objective, but I enjoy it especially for its complexity of feel and challenges. It dares me to think out of the box to find ways to improve on scores when possibilities are limitless but obscure. The physics and art were done with absolute dedication which adds a huge bonus. Just a few reasons why Badland has monopolized my playtime the past year."
—Ogster, the leader in clones saved in Badland, quoted on The Badland Forums

Badland is a 2013 indie iOS/Android game developed by Frogmind. You control a round, fuzzy Player Character flapping its way through the 2D levels while collecting power-ups to help you in your goal, the most powerful of which is the ability to create clones of your creature to effectively have back-up lives.

The story is simple. You are an unnamed character who lives in a Lost Woods setting. The story takes place during two separate days, over the course of Dawn, Noon, Dusk, and Night time periods per day. Your character is flying through this already somewhat dangerous forest when giant egg-shaped robots begin to emerge out of the water and background and begin to take over the forest. You are trying to rescue this creature and its clones, and ultimately, you are trying to find out what's going on and how to stop these machines. Along the way, you realize everything in the forest is trying to kill you. The days get progressively Darker and Edgier and the rabbits and creatures in the background are being tied up and hung, and possibly killed.

It's your job to figure out what's going on.

Badland won Apple's Independent Game of the Year award for 2013 and for a while was exclusive to Apple devices, though it was later released for Android devices and also Blackberry.

Badland is also a pioneer in Co-Op Multiplayer and Competitive Multiplayer on the same screen. Up to four people can control their own set of clones on the same device and have unique power-ups and sets of clones. As can be expected, this works better on tablets or bigger screens, but it it possible to do on a phone.

Coming May 26-29, 2015, Frogmind are releasing a console and Steam version of the game and will be released, in hardware format, to the PS3, PS4, PS Vita, Xbox One, Wii U, and via Steam. The console version is being released as Badland: Game of the Year Edition. It will be similar to the app version but with new controls, harder levels, and better graphics. Some features include the ability of the clone to move anywhere on the screen and self-adjusted screen speed, as well as the Clone being able to trigger things and use things in the game. More about it can be found here: http://ow.ly/Ipd1T

In December 2015, Frogmind surprised the world by releasing Badland 2, a follow up to the original game taking a new twist: omnidirectional (2D) levels, adding numerous factors to the gameplay, and adding a cryptic backstory that can begin to be deciphered. In it, Clony begins in the trademark woods but as he travels through icy terrain and a futuristic world, he battles replicants, escapes the more difficult traps laid for him, and discovers more of the true reason why the bots are in this forest and what clony really is.

In June 2016, native Finland company SuperCell acquired Frogmind and announced that more Free-To-Play games were being developed based in the Badland universe, while Frogmind would still develop independently from supercell. In November 2017, Frogmind soft launched a spinoff game called Badland Brawl, a Clash Royale-esque game where cartoon Badland characters launch at each other Angry Birds style to try and destroy each other’s towers. Interestingly, Clony seems to be absent from this game.

A video about the original game can be found here