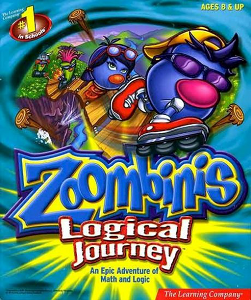 The Logical Journey of the Zoombinis is the first and most well-known in a series of Edutainment Games. The story focuses on the Zoombinis, an idyllic race of cute blue Waddling Heads, each with different appearances and personalities, who live in peace on Zoombini Isle. One day, a race called the Bloats came in and offered to improve their trade routes and infrastructure. But the Zoombinis soon found themselves exploited as underpaid laborers for the Bloats, and so they set out to find a new homeland across the sea.

At the start of each trip, the player can customize (or randomly generate) a group of 16 Zoombinis. The puzzles often involve the Zoombinis' features - hair, eyes, noses, and feet - and often require trial and error in order to figure out the rules. The puzzles themselves range from braving difficult terrain (crossing bridges over allergic cliffs or traveling over a chasm in a bubble), to getting past the locals (such as the Pizza Trolls or the Fleens), to simply getting them all in the right place (in their seats on a barge, or in rooms in a hotel).

At the very end, the Zoombinis that were successfully led through the dangers find themselves in Zoombiniville, where they build more and greater monuments as the population grows.

Unsurprisingly, the series has a Wiki

In 2015, a remake of Logical Journey, simply titled Zoombinis, was successfully funded on Kickstarter

. It was released on iOS and Android shortly afterward, and later on Windows and Mac (through Steam) and Kindle. There were multiple bugs in the game as released that make some of the puzzles freeze at times, and make others unsolvable, and there appears to be no support for fixing them.

Tropes in the game: