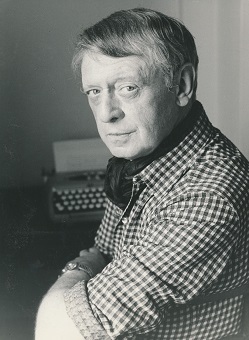 "When I first began to write fiction, I didn't think I was a comic writer; I thought I was a serious writer. I was surprised when the first novel I wrote was regarded as a funny novel."
Advertisement:

Burgess' novels tend to focus on language acquisition, Conlang and Newspeak, and many are quite incomprehsensible at first as a result. As much as he tried to cast Protection from Editors (preferring the audience to figure the languages out for themselves), his publishers have consistently managed to sneak in glossaries and explanations.

His most famous work of fiction is A Clockwork Orange. He also contributed to the caveman language in Quest for Fire and translated theatre plays and operas such as Cyrano de Bergerac and Carmen in English.