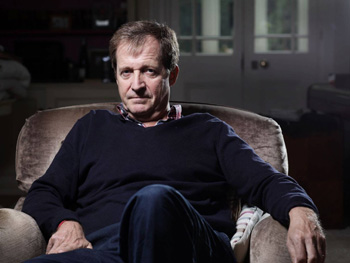 "There is something in me that makes me see things through."
"Fuck off and cover something important you twats!"
—Email sent to BBC journalists by Campbell in 2005
"Final sentence of earlier email probably a bit colourful and personal considering we have never actually met but I'm sure you share the same sense of humour as your star presenter Mr P[axman]."
—Follow-up email
Advertisement:

Best known to some as the inspiration for Malcolm Tucker, but to everyone else as Tony Blair's official spin doctor, Alastair John Campbell (born 25 May 1957) is a former political journalist who switched sides in 1994 to help New Labour deal with the press. Over the next nine years he entrenched his already fearsome reputation as a Manipulative Bastard - thanks in no small part to resentful journos, not to mention comedians who played his aggressive persona for laughs. (For more context see British Political System.)

In 2003 he resigned from government and has since spread himself between the lecture circuit, publishing his diaries, charity fundraising, and writing novels. He did return to fight for the Labour Party in the 2005 and 2010 general elections, but unlike his long-time colleague and frenemy Peter Mandelson, has yet to commit to a full time political comeback. Like Mandelson, he carries a lot of toxic baggage; he is inseparable in the minds of many from the 2003 Iraq War and subsequent suicide of weapons inspector David Kelly.

Recently, he was expelled from the Labour Party for voting for the Liberal Democrats (like many Labour members, he was unhappy with the party's refusal to be 100% pro-remain on Brexit) in the European Parliament elections. Of course, he still identifies himself as Labour (and decidedly not Lib Dem).

Depictions of Alastair Campbell in fiction: