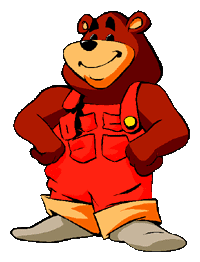 "There's a lot of work to do before Kayla wakes up. I want to make her a big, beautiful birthday cake. Oh, will she ever be surprised!"
— Fatty Bear
Advertisement:

Fatty Bear is a rather short-lived series of children's games made by Humongous Entertainment. Unlike most other franchises of the company, Fatty Bear lasted one Adventure Game and two Minigame Games (though technically only one since the other was just an Updated Re-release). His games consisted of Fatty Bear's Birthday Surprise, Fatty Bear's Fun Pack, and Putt-Putt & Fatty Bear's Activity Pack. He was also playable in Putt-Putt Goes to the Moon's minigame "Bear Stormin'" (which received a standalone demo release later). After those games, he was reduced to being a simple cameo character for other Humongous games. According to one of the original workers, this is because the person who owned the rights to him had no interest in making any further games.

Fatty Bear is a Living Toy teddy bear who only comes to life when the family is sleeping. He's an extremely polite Nice Guy who is owned by Kayla, a little girl who has a Nuclear Family and lives in a suburban home. The only main game in the series, Fatty Bear's Birthday Surprise, is an Adventure Game centered around Fatty trying to prepare a birthday party for Kayla. It goes well until he releases a puppy, who begins to cause trouble for everyone.

As Fatty Bear's Birthday Surprise is the only main game, all examples are referring to it unless stated otherwise.

Tropes in the Fatty Bear games: