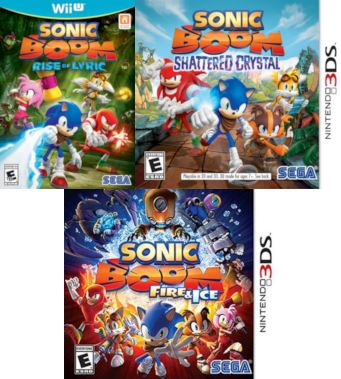 Sonic Boom is a spinoff series in the Sonic the Hedgehog franchise, developed concurrently with the TV show and comic series. The series began with Rise of Lyric for Wii U and Shattered Crystal for Nintendo 3DS, both of which were released in November 2014.

The story, what little there is, is set in an Alternate Continuity where Sonic and his friends live on islands and are adventurers who usually clash with Eggman now and then. Rise of Lyric's plot sees Sonic, Tails, Knuckles and Amy fighting Eggman as usual when his robot army outnumber them near a odd temple entrance. Wanting to save his friends and against their objections, Sonic opens the entrance so they can escape into only to find that it was a prison for the titular Lyric who Sonic unwittingly frees. Wanting to fix his mistake, Sonic and his friends set off on a quest to stop Lyric and whatever he has planned as well and continue their tussle with Eggman.

Shattered Crystal's plot, apparently set some time after the former game, has Lyric kidnap Amy and Sonic and his friends setting off to rescue her. Unlike the former game. Amy isn't playable, but rather replaces her with Sticks (who ironically wasn't playable in Rise of Lyric).

A third game in the series, Fire & Ice, was announced for the 3DS

and is similar to Shattered Crystal, except Amy is now playable and (as the title states) all characters can switch between fire and ice modes. The plot has Sonic and friends facing Eggman and new villain D-Fekt as they attempt to stop the weather-related aftereffects of the former's Ragnium mining operation from tearing the world apart. The game was released on September 27th, 2016.

Rise of Lyric and Shattered Crystal are also the final Sonic games to feature Chikao Ohtsuka as Eggman before his death in 2015.

The games contain examples of