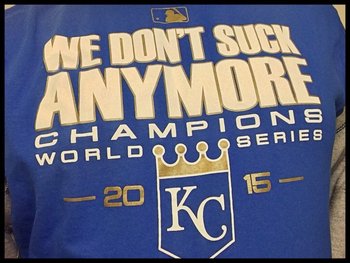 Sonic: Then WHAM! The reviewers slam it and you get, like, 4 out of 10 because you were dating this human girl in it.
Shadow: Tha—wait. I don't like that part...
Sonic: But then you bring it all back with an amazing game, and you're good to go! Easy as pie!
— The Sonic Twitter Takeover evoking this while discussing how to Win Back the Crowd.
Advertisement:

Advertising trope where a company admits they've had trouble in the past, but if you buy their products now you won't be disappointed. Basically, they are saying they have what it takes to Win Back the Crowd from whatever caused them to leave in the first place, but rather than silently do it and let word of mouth take over, they've decided on a less subtle approach. If not done with the correct level of self-deprecating humor, it tends to fall flat. There can be a backlash if most people didn't see anything wrong with the product in the first place, but the company is pretending they sucked before to justify changes.

Compare New and Improved, which tries to imply that the product is better that it was without going into any detail about what was wrong before, or what they changed. See also Lampshade Hanging, The Man Is Sticking It to the Man, Public Relations Ad. If a company pretends to be someone else with a tone of "they don't suck anymore", it's also AstroTurf.

Contrast Our Product Sucks, when a company uses self-deprecation in an attempt at Reverse Psychology. Asbestos-Free Cereal is when they imply the competition's product sucks more than they do.

Known uses of this trope: