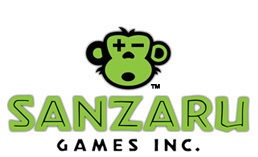 Sanzaru Games is a Video Game development company. It was founded in California in 2007 and is currently still in business. They primarily work on ports of existing games to new systems or rework them for less powerful hardware. Their original titles are considered Shovelware, perhaps a bit unfairly. While low budget, they are at least competently made. This is likely the reason that they have been picked up to work on a number of big name franchises such as Sonic the Hedgehog and the God of War series.

This company was eventually bought out by Oculus Studios, following the infamy and failures of both Sly Cooper: Thieves in Time and TRON RUN/r.

Their name is a reference to the three wise monkeys, called the sanzaru in Japanese.