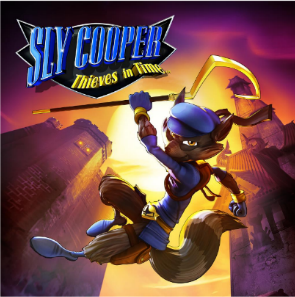 It's about time!
The fourth game in the Sly Cooper series, and the first not to be done by Sucker Punch. Instead it was done by Sanzaru Games, who were the head of the Sly Collection (a HD port of the original trilogy).
Advertisement:

A return to the series after an eight year hiatus. Set somewhere after the events of Honor Among Thieves, Sly and the gang reunite when the pages of the Thievius Raccoonus start to go blank. Someone's messing with the timeline and targeting the Cooper clan. The gang, armed with a time machine, intends to find out who and stop them.

The game is notable for having a very controversial Plot Twist and ending, so beware of spoilers.

Example of:
Badass in Distress