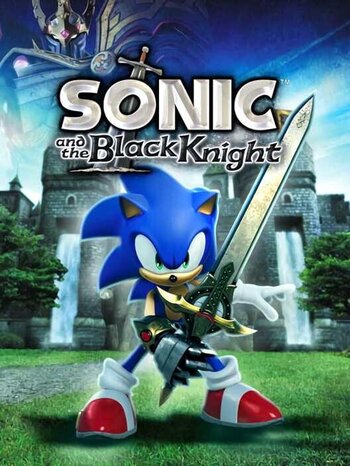 Are you worthy?
Advertisement:

Sonic and the Black Knight is the second and final installment in the Sonic Storybook Series and the second Sonic the Hedgehog game released exclusively on the Nintendo Wii. It is based off the Arthurian Legend.

One cloudy day, a young sorceress is shown running away from a mysterious group of monsters, after being surrounded by them and using the magic she has, she summons a portal, bringing over the likes of a very surprised Sonic (and a couple of chilidogs) into the world of Camelot. After making a quick escape, the young sorceress, named Merlina, explains to Sonic what is going on...

The once good King Arthur has gone mad thanks to the power of the scabbard of Excalibur, with its power corrupting the king and turning him into a mad tyrant known as the Black Knight, leading him to summon the demons of the underworld and enslave the kingdom of Camelot with his Knights of the Round Table, with Merlina having summoned the blue hedgehog in hopes of ending his reign of terror. Sonic being the good freedom loving guy he is, agrees to the quest. However, Merlina explains that he needs to use the special talking sword, Caliburn, in order to defeat the corrupted king. The two however, get off onto a rocky start, as Caliburn is dismissive towards Sonic and his abilities, much to Sonic's displeasure. Nevertheless, Sonic and Caliburn must work together and embark on a quest through the kingdom of Camelot in order to end the Black Knight's reign, finding out in the process that there might to be more to this story than it seems...

Much like its predecessor, Sonic and the Black Knight is an linear on rails platformer that takes full advantage of the Wii's motion controls, this time however, you're not controlling Sonic with the motion controls, but the sword he's carrying, as Black Knight infamously adds swordplay to the Sonic gameplay, with you controlling Sonic with the nunchuck and the sword he's wielding on the Wiimote, as you use it to slash enemies while running at high speeds.

This is notably the last Sonic title for several things: it was the last to be written by Shiro Maekawa, the last (until Team Sonic Racing) to have vocal themes by Crush 40 and, perhaps most notably, the last game in the franchise to feature the 4Kids Entertainment English voice cast, which would be replaced with the current Studiopolis cast in 2010 (bar Mike Pollock as Dr Eggman).