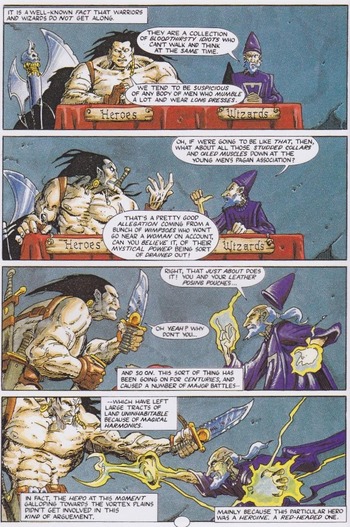 Marina: Wizards are SCHOLARS. And they don't do "magic tricks". They are masters of the arcane arts, able to bend the elements to their will! But you knights have fun hitting each other with pointy metal sticks.
Pearl: Oh, we will! Have fun wearing your battle pajamas on the back lines.
— Splatoon 2
Advertisement:

When warriors and sorcerers are depicted as enemies or rivals. This trope is one of the oldest examples of human fighting skill, cunning and grit being pitted against superpowers and is very common in Sword and Sorcery settings which feature a Barbarian Hero against an Evil Sorcerer in a classic Brains Versus Brawn, Brains Evil, Brawn Good conflict as Magic Is Mental.

Usually, the warrior is The Hero and the sorcerer is the Big Bad or one of the villains (it is possible, but rare, to have the reverse be the case). They are usually a Badass Normal who relies on their fists, brains and weapons (which may or may not be magical) to win and may be aided by a good wizard or another supernatural being who serves as The Mentor and/or the Big Good.

If the warrior does have superpowers it will come in the form of them having enhanced physical abilities they were born with or where bestowed onto them by someone else. They might also be a supernatural martial artist, Magic Knight, Kung-Fu Wizard or ki manipulator. In that case, their sorcerer rival will be a Squishy Wizard who has little to no skill in melee combat. If the warrior is simply a Badass Normal, it is also possible for the sorcerer to have some skill in melee combat to allow for physical brawls while being truly dangerous because of their magical knowledge.

The warrior is also likely to be a professional Mage Killer.

Warrior Versus Sorcerer need not be as simple as a clash between good and evil; it can also be a clash between ideologies. Warriors might see magic as evil, uncontrollable or a cheat. Wizards might view themselves as superior to warriors because of their powers and magical knowledge or may see warriors as simple-minded brutes.

See also Linear Warriors, Quadratic Wizards (sorcerers being more versatile than warriors who rely purely on might). Compare Dragons Versus Knights where the dragons take the place of the sorcerer. Contrast Sword and Sorcerer which is about sorcerers and warriors working side by side as partners or friends.