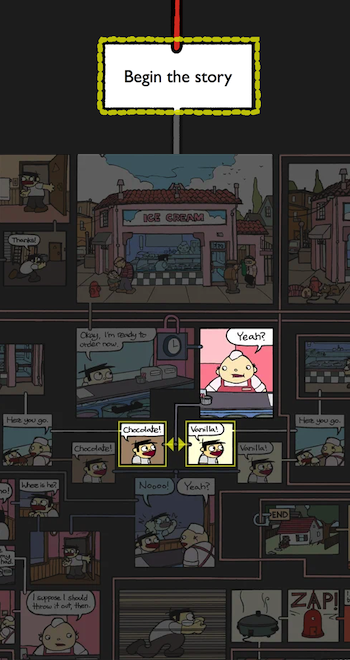 After the tutorial level, the rebel leader offers you a chance to help her free the galaxy from the Dark Order. But your hero would have to give up his grand life as a space mercenary. You ponder the decision, then have your hero turn down the offer. You then spend this space opera being dragged into one conflict after another, meeting the rebels under awkward circumstances, and making life hell for the Order. Finally, you get to put a bullet between the eyes of the Shadow Prince, collect your reward and fly off into the sunset.

After your victory, you go online to discuss the game. But what's this? You don't remember an infiltration mission aboard a satellite. And a romantic subplot with the rebel leader? How come no one's talking about the MX-6000 railgun that got you through the final stages? After skimming a few threads, you can't help but wonder: did you even play the same game as everyone else?

The answer: not quite. As it turned out, a lot more was riding on the rebel leader's innocuous first question than you ever could have guessed. By making one choice or the other, you determined the entire course of the rest of the game.

Not every game is quite as extreme as this example, but the Big First Choice (or second, or third) is a common way of extending the life of a game by making the player's choices at key points have a dramatic effect on the way the game plays out - perhaps even the way the game plays, period. Multiple playthroughs are absolutely necessary to wring 100% Completion out of games that feature such choices: sometimes the different paths will converge again at the end, but it's just as likely that each individual choice will lead to a different ending.

One method of Story Branching. Subtrope of For Want of a Nail. Compare Multiple Game Openings, where the the story branches even before you make the first in-game choice, and Last-Second Ending Choice, where you play through most of the game before a major and irrevocable plot split. Contrast But Thou Must!, which might look like a big choice, but really isn't; and Non Standard Game Over, for where one of the choices ends the game almost immediately.