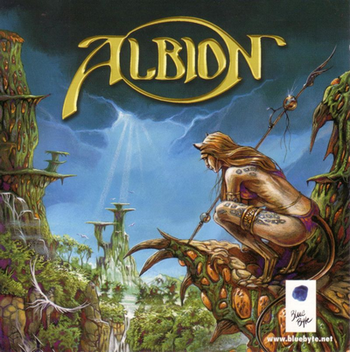 Albion is a computer Role-Playing Game/Dungeon Crawler developed by Blue Byte, released in 1995 for DOS, as a Spiritual Successor to the Amiga games Amberstar and Ambermoon. Originally released in German, the game was later translated to English for the rest of Europe.
Advertisement:

While technically unimpressive, the game featured an imaginative and rich setting combining fantasy and science-fiction elements in an original, if at times slightly confusing way. The story centres around the adventures of Tom Driscoll, a pilot for a multinational corporation vast enough to excavate entire planets, as he crash lands on one such planet. This world, dubbed "the Nugget" by the corporation and called Albion by its inhabitants, turns out to be full of life and inhabited by an alien sentient species as well as Celtic humans. It's also teeming with literal magic. Tom and his fellow crash-landed Terran Rainer Hofstedt set out to find their spaceship, which surely isn't going to excavate the planet to pieces now that it turns out it's actually full of life... right!?

Albion includes a complex back-story and detailed descriptions of the game world. Talking to the right people will reveal much information about topics relevant to the area you're currently in, including their cultures, philosophies, history, and many many more. Only a little of this is actually relevant to the plot.

The game features an interesting mix of 2D and 3D perspectives: while most indoor and outdoor places are seen from two Three Quarters View, all dungeon crawling has to be done in 3D. Most of these dungeons lack light sources, forcing the party to rely on rather short-lived torches to get anywhere, making dungeon exploration downright scary. This is done especially well in the very first planetside dungeon: while exploring the decidedly unassuming cellar of their host house, the main characters suddenly get stranded in almost total darkness, armed with nothing but daggers and knives, hearing only the growls of resident feral kangaroos out to get them. You get treated to some Survival Horror right there, if only for a few minutesnote Unless you've found a gun in the prologue. Then you can go Doom on them right there..

Not to Be Confused with the setting of Fable, the miniseries by Alan Moore, or any of the other dozens of fictional and non-fictional uses of the name.