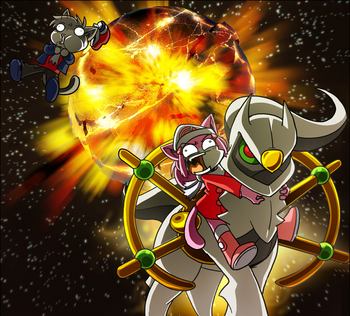 ...what's the worst that could happen?
"I wish I was old enough to breed monsters, but my dad says I have to wait till I'm thirteen to play God."
— Rich Boy, Monster Racers
Advertisement:

Sometimes, in Mon games, the game will allow the player to capture and control creatures that a preteen hero has absolutely no business owning. A kind of Did You Just Punch Out Cthulhu? moment for The Kid with the Remote Control, Mon games will allow the player to capture cosmic entities, living forces of nature, and other cataclysmal beings. Of course, other media occasionally have gods captured by humankind as well.

Don't expect this power to be easy to come by, however. A lot of Olympus Mons require that you prove yourself worthy to command them by defeating them in combat first. If this is the case in a video game, this often means that the fight against them will be That One Boss, or a Superboss that isn't accessible until later in the game. Basically the living equivalent of an Infinity +1 Sword.

Strangely, these beings seem to be perfectly content with their human masters, and rarely rebel. If they do, though? Be very, very afraid.

The name is a play on Olympus Mons, Latin for Mt. Olympus and also a volcano on Mars that's also the largest known planetary mountain in the solar system. This trope is the exact opposite of Com Mons.

Giratina, Ruler of the Distortion World, is owned by a 10-year-old kid.

Giratina, Ruler of the Distortion World, is owned by a 10-year-old kid.