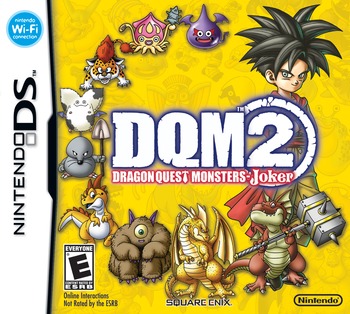 The hero decides to stow away on a zeppelin heading towards the world monster tournament, observing as the reigning championnote Solitaire from the original Joker declares the ship unfit for someone of her caliber and storms off to find more appropriate accommodations. This turns out to be prescient, the ship is brought down shortly after takeoff, right after the Hero is caught as a stowaway and forced to work as a deck hand for the crew.

Waking up near the crashed ship, the engineer, Rory Bellows finds him and sets him off on a quest to attempt to find survivors. It seems that the ship has crash landed on an island populated by hundreds of monster species — fortunately for him, he always wanted to be a monster scout...

As a monster catching game, various flavors of monster are available, out of several broad families — Slime, Dragon, Inanimate Objects, etc etc. Each monster has up to 3 to 5 skill trees they gain from their species and parentage, and gain skill points to place in these trees upon levelup. (This system is based on the Dragon Quest VIII system of skill trees, and is almost identical to the system in the original Joker.)

Each monster also has from 1 to 4 traits, passive benefits (or penalties) that affect them no matter what skill trees they have inherited from the breeding system — for example, some monsters are just naturally able to move two or three times a turn, this is something they cannot pass on to children of a different species.

Received an Updated Re-release, Dragon Quest Monsters: Joker 2 Professional, which added 110 new monsters, completely re-balanced the multiplayer, and roughly doubled the single player campaign. Unfortunately, due to some poor timing in both release date and localization, this version was not the one localized.