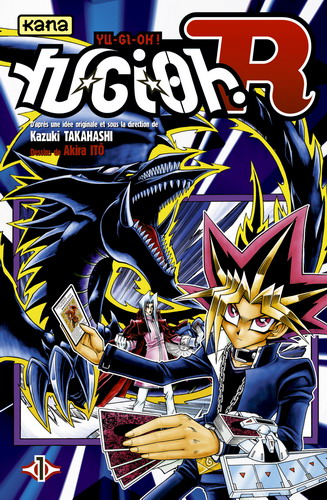 A spinoff of the Yu-Gi-Oh! series, specifically the manga, Yu-Gi-Oh! R is written by Akira Ito, one of Kazuki Takahashi's assistants on the manga. The story, taking place between the Battle City and Memory World arcs, kicks off with Yako Tenma, Pegasus' adopted son and protege, taking over Kaiba Corp and challenging Yugi to a duel. There, he reveals "The Wicked Avatar", one of three "Evil Gods" that Pegasus had designed before his death. After destroying Yugi's Osiris in one blow, Yako kidnaps Anzu and takes her to the Kaiba Corp building, where he intends to sacrifice her in "Project RA" as revenge for Yugi causing Pegasus's death at the end of Duelist Kingdom, unaware that it was Dark Bakura that killed him.

Yugi, Jonouchi, and Honda race to Kaiba Corp to rescue Anzu, only to find that Yako has commissioned the Card Professors—thirteen professional American duelists—to block their way. Our heroes must battle their way up the tower to stop Yako before he can carry out his plans. Meanwhile, Kaiba and Mokuba, not exactly thrilled with Kaiba Corp getting taken over again, storm the skyscraper to reclaim the company.

Notable for its speedy pacing in comparison to the earlier series; duels usually only take up one or two chapters instead of dragging on and on.

All five volumes have been released in the U.S. under Viz's Shonen Jump label.