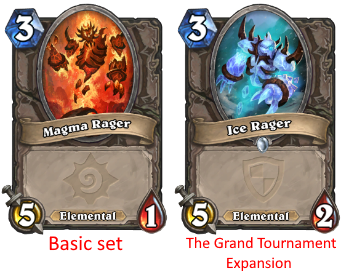 Same attack power, same casting cost, but Ice Rager has one extra health. Not to mention, it's a lot cooler.
Advertisement:

A term used in any kind of multi-player game (including Video Games, Collectible Card Game, and Tabletop Games) to describe the process in which newly-added-content can be played along with the old-content, but with the new content being far more powerful/useful in every sense. This process leaves old-content completely worthless, save for a few exceptions and for Cherry Tapping.

This makes sense, at least from a monetary point of view. New-added-content requires people to actually buy it and use it, but why would they use their money to buy some obscure thing they don't know how to use (yet) if they can keep on using their awesome Infinity +1 Sword by paying 5 mana? Easy, make every new content item an Infinity +2 Sword which requires 3 mana to work. And the same will happen in the next expansion, with an Infinity +3 Sword that only costs 2 mana.

The thing is that this gets out of hand really easy, particularly in a Long Runner. After four or five expansions, with the new Infinity +8 Swords that gives you 10 free mana, there is little point in using the Infinity +3 Sword that costs 2 mana, and let's not talk about the lame Infinity +1 Sword that cost 5 mana! (Who'd ever use that, anyway?)

Power Creep virtually always leads to a Broken Base, with the most "conservative" players stating that the new unbalanced content is an insult to the original game (which might be true or not, depending on the case). On the other hand, there will always be players who like these new add-ons, saying that it actually makes the game more fun to play. Additionally, Power Creep can actually be a boon to Tournament Play: Long, drawn-out games are harder to schedule since it's less easy to predict when everyone will finish on time. Thus, with Power Creep making games faster, tournaments become more accessible, less time-consuming, and easier to plan. (This is not an idle concern; the makers of Magic: The Gathering are on record as having to reject card designs because they would bring the match to a halt for five or ten minutes.)

As a general rule, though, Power Creep has a negative connotation. The reason behind it is that, while there may be some few exceptions, it usually shows that the producers were unable to come up with something creative, and instead resorted to repeating themselves, just with bigger numbers. Power Creep also tends to lead a game beyond its pre-defined limits, with one of two results: it will becomes a competition of mindless speed, or of predictable slow strategies.

The one time Power Creep can be positive is when it is used on something that was already worthless to begin with. The two Hearthstone: Heroes of Warcraft cards in the page image are actually an example of this. The Ice Rager is "strictly better" (as Magic players put it) to the Magma Rager, having two Hit Points instead of one and being identical in all other respects (3 Mana to cast, 5 attack); if you have access to both, there is never a reason to play Magma Rager instead of Ice Rager. Having said that, there was also never a reason to play the Magma Rager in the first place, because it's an awful card.note In Hearthstone, you have 1 Mana on your first turn, 2 on your second, 3 on your third, etc until maxing out at 10. This rule can be broken, but only with difficulty. So, for most players, a card that costs 3 Mana, like Magma Rager, can only be played on turn 3. The problem is that it's also a One-Hit-Point Wonder... and cards with 1 Attack, capable of killing it, typically only cost 1 Mana. If you spend 3 Mana putting a threat on the table and your opponent destroys it at the cost of 1 Mana, then, all other things being equal, your opponent came out ahead. So, in practice, the only thing the Magma Rager does is waste 2 Mana. The Ice Rager, being a waste of only 1 Mana, is marginally better; but it also raises the question of whether wasting Mana at all is really the best way to play.) Additionally, releasing a (more) playable version of it lampshades the fact that you released junk in the first place.

This trope is the Gameplay Mechanics counterpart to So Last Season, Overshadowed by Awesome, Sequel Escalation and Serial Escalation, which refers to narrative or thematic elements.

Compare with Revenue-Enhancing Devices. So Last Season applies to non-gameplay examples of this trope. The complete opposite of Promotional Powerless Piece of Garbage, which is new content that is either unviable or outright unusable.

Not to be confused with Power Creep, Power Seep.