Video Game / Plants vs. Zombies 2: It's About Time 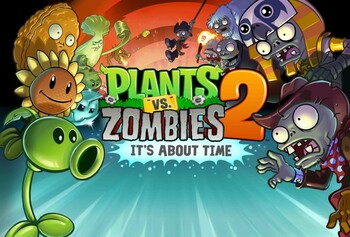 After the events of Plants vs. Zombies, zombies once again attack the front yard. After the zombies are all defeated, the player gets the hot sauce and gives it to Crazy Dave for his taco. After eating it, Crazy Dave laments about wanting to eat the taco again. Enter his partner, Penny, a time traveling trailer. Unfortunately, Penny ends up warping Crazy Dave (and you) deep into Ancient Egypt, revealing that they time traveled 4500 years in the past. Oh, and there's more zombies.

Go here for general tropes introduced in the original game.

The Trope-ies are Coming, and they have the have Dinosaurs, Disco, and Droids.