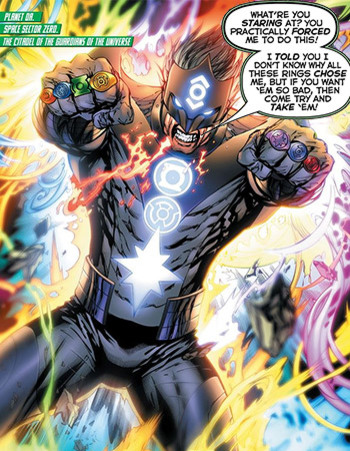 The whole is more than the sum of the parts.
Advertisement:

Sometimes, several items put together deliver additional benefits more than if you just numerically or synergistically added up the power of all the items. It can apply both to powers and objects.

Most of the time there is no In-Universe explanation offered for why these items have to be together to produce the extra effects. It could be said that the enchantments need to 'overlap' or that the pieces when connected form the circuit of a system that then produces the effects. Most games with this mechanic will also have each item's description "kindly" inform the player of the potential benefits, without any proper explanation of just how the character could know about them. Maybe they were written somewhere on the items themselves.

This trope is absurdly prevalent (though by no means universal) in MMORPGs, but it turns up in other genres as well. It is often used to encourage trading among players, but it has the side effect of making the more obsessed sink extra time and money into a game. If significant enough, this trope should hopefully cut down on Rainbow Pimp Gear. Outside of MMORPGs, stories may have magical accessories, weapons, or magic rings be created as part of a set by powerful mages with this intended effect.

Related to Gotta Catch Them All!. Compare Counterpart Artifacts.

When two Fullbottles that produce a Best Match are inserted into the Build Driver, not only does it give a stronger form than a mismatch would, but it enables the use of a unique weapon.

When two Fullbottles that produce a Best Match are inserted into the Build Driver, not only does it give a stronger form than a mismatch would, but it enables the use of a unique weapon.