Literature / The Wonderful Wizard of Oz 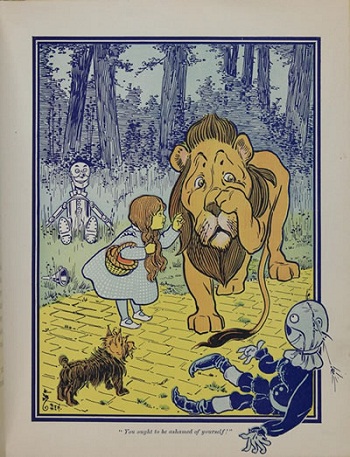 Dorothy, Toto, the Scarecrow, and the Tin Woodman meet the Cowardly Lion.
"The story of 'The Wonderful Wizard of Oz' was written solely to pleasure children of today. It aspires to being a modernized fairy tale, in which the wonderment and joy are retained and the heart-aches and nightmares are left out."
— L. Frank Baum, The introduction to first-print copies of the book
Advertisement:

The Wonderful Wizard of Oz, written by L. Frank Baum in 1900, was an instant success, which has been much homaged and parodied. It spawned many sequels, beginning with The Marvelous Land of Oz. For the rest, see here.

Dorothy is a little girl from Kansas whose farmhouse is carried away to Oz by a cyclone, with her and her dog Toto inside. The cyclone drops the house on the Wicked Witch of the East, killing her. Dorothy is quickly hailed by the native Munchkins as a hero, but wants nothing more than to get home. The unnamed Good Witch of the North is sympathetic, but unfortunately has never heard of this strange place called "Kansas". So she gives Dorothy the wicked witch's silver shoes, kisses her on the forehead for magical protection, and sends her off to the capital — the Emerald City — to ask the Wizard who rules there for his advice.

Along the way, Dorothy meets the Scarecrow (who wants a brain), the Tin Woodman (who misses his heart), and the Cowardly Lion (who wishes he had courage). Together they travel to the Emerald City and ask for help from the Wizard, who orders them to first kill the aptly-named Wicked Witch of the West. The Witch, after seeing Dorothy and her friends heading towards her lair, enslaves the girl, and schemes to claim the magical silver shoes for herself.

The book has received quite a few adaptations since its publication, with the 1939 movie musical The Wizard of Oz becoming the most famous version of the story. While the basic plot structure seems close, the movie made several deviations and edits – for instance the film's having only one Good Witch instead of two, the complete omission of the Dénouement journey after the defeat of the Wicked Witch, and most significantly the ending (the film implies Dorothy's adventure is All Just a Dream, while in the book it's most definitely real).

For a list of the many, many adaptations, see Land of Oz, and for Whole-Plot Reference episodes and parodies in other works, see Off to See the Wizard.

The book version of The Wonderful Wizard of Oz includes examples of:

Aunt Em had just come out of the house to water the cabbages when she looked up and saw Dorothy running toward her.
"My darling child!" she cried, folding the little girl in her arms and covering her face with kisses. "Where in the world did you come from?"
"From the Land of Oz," said Dorothy gravely. "And here is Toto, too. And oh, Aunt Em! I'm so glad to be at home again!"

Alternative Title(s): The Wizard Of Oz