Literature / Tales of the Magic Land 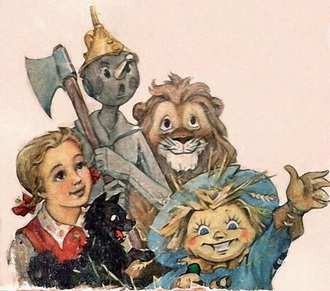 "Totoshka, I have the feeling we're not in Oz anymore."
Advertisement:

A little Kansas girl named Ellie Smith and her faithful dog Totoshka find themselves in Magic Land. In order to get home, Ellie must make a long journey through the magical country. And she must assist three beings in the granting of their fondest wishes. She meets Strasheela the living scarecrow, then the Iron Woodman and the Cowardly Lion, and the four of them continue on to the Emerald City to see the mighty wizard Goodwin the Great and Terrible, in order to ask him to grant those fondest wishes. But after a multitude of adventures, they unmask Goodwin, and he turns out to be a perfectly ordinary balloonist from Kansas, blown there long ago by a windstorm. In spite of that, he does fulfill the wishes of all three of Ellie's friends, and Ellie herself returns home with the help of a pair of silver shoes.

Now if this sounds familiar, it should since this was based on The Wonderful Wizard of Oz.

In the 1930's, Russian author Alexander Volkov was looking for an English book to translate into Russian as a hobby. He chose L. Frank Baum's The Wonderful Wizard of Oz as his book. He brought out his rather liberal translation of the story in 1939 (the same year MGM released their film). He called it The Wizard of the Emerald City, and the country where the story is set became not Oz, but Magic Land. The Soviet Union was not part of international copyright protection back then, so it was perfectly legal. Modern Russia is, but In Name Only, by the way.

The book was revised in 1959, with illustrations by Leonid Vladimirsky, three years after The Wonderful Wizard of Oz entered public domain. It was later adapted into a stop-motion series of shorts in the 1970s.

What is Volkov's Magic Land like? And how does it differ from Oz?

One of the main differences the reader will find is in the names of the characters. Baum's Dorothy Gale has become Ellie Smith and the Wizard is now James Goodwin. Of the heroine's three friends, the Cowardly Lion is much the same, but the Scarecrow is called Strasheela (derived from a Russian word meaning "terrifying", with a not very serious suffix, with a resulting meaning along the lines of "Scary-pants"), and the Tin Woodman is now the Iron Woodman. It's because tin doesn't rust. All four of the witches, good and bad, have new names: Villina (Baum's Good Witch of the North), Gingema (Wicked Witch of the East), Bastinda (Wicked Witch of the West), and Stella (Baum's Glinda, Good Witch of the South). And there's also an Ogre who captures Ellie early on and is about to devour her when the Woodman makes quick work of the creature with his trusty ax!

Yet many of Baum's features survive intact. The young heroine, as always, comes from Kansas. Readers will find the familiar Yellow Brick Road leading to the same fabulous Emerald City. And we still have the Munchkins who live in the Blue Land and the Quadlings, renamed the Chatterers, of the Rose Land. The Winkies, however, live in the Violet Land, while the Yellow Land, to the north, is seldom mentioned and never described. In Volkov and his successors, Blue Land lies to the west, and Violet Land to the east. (Rose Land is still in the south.) The Munchkins are renowned for their munching, the Winkies are skilled craftsmen, and the Chatterers can never stop talking! But in all its essentials, Volkov's treatment of the opening story is the same tale that the English-speaking readers (and filmgoers) have loved for generations.

Tales of the Magic Land books are:

The books in the series have been translated into English (or retranslated, in the case of the first book) by Peter L. Blystone, and were published by Red Branch Press in three volumes (two books a volume) in 1991, 1993, and 2007.

In Germany, one author has written his own set of sequels to Volkov's books.

The Wizard of the City of Emeralds, a 1974 Russian television series, brought the first three Volkov books alive with stop-motion animation. Ellie and Totoshka are carried to the Magic Land, meet their three friends and the wizard Goodwin, and destroy the witch Bastinda. Later, they battle Urfin Jus’s wooden army, then defeat his schemes to manipulate the seven underground kings.

Sergei Sukhinov wrote his own series of sequels to The Wizard of the Emerald City. Using The Wizard of the Emerald City as a base, he disregarded Volkov's sequels and took his own books in a different direction. Sergei's books have been described as "Wizard of Oz meets Tolkien". In this series of ten books, Ellie and her friends fight the forces of an evil warlock named Pakir in an epic struggle between Good and Evil. It introduces Corina, a stepdaughter of Gingema, The Wicked Witch of the East.

Sukhinov also wrote series of books called Tales of the Emerald City, which covers the childhoods of many of the characters in The Emerald City series and covers details not covered in other series.

The adaptations contain examples of: