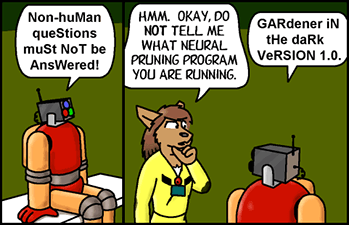 Any character who is told not to go in the basement, stay away from the woods, get out now, etc. will do the opposite, thus playing right into the hands of the very person who told them what to do/not do. This trope heavily relies on using the pride, perversity, or curiosity of someone else to manipulate them.

It's useful as the central tool in a Batman Gambit since you need to make your pawns feel like they are making their own decisions. Sometimes this can overlap with Do Not Do This Cool Thing, by making the forbidden attractive just because it is forbidden.

There's a standard sitcom plot where one party (usually the parents) attempts to dissuade or encourage another party (usually the kids) by, naturally, doing the opposite. Often begins with one parent reading a child psychology book and going "Hmmm..."

Usually involves second party figuring it out, and either doing exactly what they're told, or pretending to "fall" for it and being totally obnoxious in the other direction.

It's a Sub-Trope of Batman Gambit. Compare Thought-Aversion Failure (telling someone not to think about something will lead to them thinking about that very thing — involuntarily).

Compare Too Dumb to Live and Genre Blindness. It's worth comparing to Could Say It, But.... Do not, under any circumstances, take this trope to an extreme, as it may approach Mind Screw and I Know You Know I Know.

You could see these examples, but I'm telling you it's a waste of time:

In the past, when Bart is only a toddler, Homer tries using reverse psychology on him to get him to give up his crib so that Lisa can have it, but it doesn't work.

In the past, when Bart is only a toddler, Homer tries using reverse psychology on him to get him to give up his crib so that Lisa can have it, but it doesn't work.