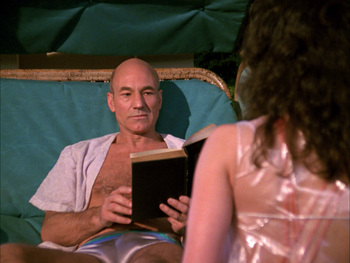 On the planet Risa, two aliens beam into the lobby of a resort. They consult the information desk, inquiring about the whereabouts of one Jean-Luc Picard. The computer has no information on such a person. The male is concerned that they may have made a mistake, but the female assures him that he'll be here eventually.

Meanwhile, on the Enterprise, Picard and Troi have just wrapped up a grueling trade negotiation, and Troi is concerned. The Captain is, simply put, burned out. Some R&R is clearly in order, but Picard is not one to give in to leisure so easily. Faced with a three-pronged attack from Troi, Doctor Crusher, and Commander Riker (well, four prongs if you count the threat of Troi's mother visiting), Picard finally caves in. The Enterprise is scheduled for some routine maintenance anyway, and while that's going on he'll take a week off and go somewhere fun. At Riker's suggestion, he decides to head to the tropical paradise planet known as Risa. While there, Riker asks him to pick him up a souvenir: a local piece of artwork called a horga'hn. Who knew Riker was into local folk art?

Touching down on Risa, Picard is immediately set upon by a woman, who kisses him passionately, then immediately breaks it off and apologizes, as she thought he was someone else. Or maybe she was just trying to hide from the badly-dressed Ferengi who just walked into the lobby. And while Picard checks in, in a far corner of the room the two aliens from the beginning of the episode watch all of this, silently.

Once safely ensconced in a beach chair and catching up on some "light" reading, Picard soon realizes that Riker has played a little practical joke on him. It seems a horga'hn is a Risan fertility totem. And to openly display it means that one is announcing their intent to seek jahmaharon ("I don't even know what it means."). It's only after being propositioned for the fifth time that someone explains it to him, and immediately he stashes it. Unfortunately this doesn't deter the Ferengi from earlier from coming over, blocking Picard's sun, and making vaguely threatening statements. He warns him not to work with "that woman," and if Picard knows what's good for him, he'll hand over "the disk." Near the end of his rope now, Picard stands up and warns the Ferengi to back off; being a Ferengi, he does.

And then, once the Ferengi has scurried off somewhere, the woman from earlier approaches Picard. She introduces herself as Vash, and well, sparks immediately fly between them. But when Picard realizes that she's the woman that the Ferengi was talking about, he decides he's finally had enough of this and stalks off. When Vash chases him down, they both run into the Ferengi again. Really not wanting to get involved, Picard excuses himself, but not before Vash slips something in his robe (no, not like that).

Picard walks into his room to find it occupied. The two aliens from before are there, waiting for him. They introduce themselves as Vorgons. They're policemen from the future, on the trail of something called the Tox Uthat. A piece of weapons technology from their time, the Tox Uthat was sent to the distant past by its creator to keep it from falling into the wrong hands. The item has become something of a local legend on Risa, as former archaeology scholar Picard can attest. The Vorgons claim that according to the history books of their time, the Tox Uthat was found by Jean-Luc Picard while vacationing on Risa. They've come to take possession of the device so that it can be safely returned to the proper authorities in the proper time frame. Picard tells them that he's only just arrived and hasn't found anything yet. The Vorgons say they'll be back, and promptly beam out. Once they're gone, Picard contemplates his weird day—and finds the object Vash slipped into his robe. A data disk.

Tracking down Vash at her quarters, he finds her cleaning up a mess. Apparently her Ferengi friend has been here. Picard returns the disk to her and asks for some answers. It would seem that Vash was the personal assistant of the late Professor Samuel Estragon, an archaeologist who made the Tox Uthat his life's work. That disk contains all the Professor's research notes. The Ferengi, Sovak, is a former business associate of the Professor's, who sometimes helped out with the more, ahem, unsavory aspects of the interstellar treasure-hunting business. With Estragon now dead, Sovak wants the research notes for himself, while Vash just wants to find the Tox Uthat for the Professor's sake. Seeing a lady in distress, Picard decides to take over the search for the artifact so that Vash can be safe, but Vash isn't having any of it. She's invested way too much time and effort into this project to back out now. Besides, they could make a great team.

It turns out they do, because once they set out for the most likely location of the Tox Uthat, they are set upon by Sovak... and easily overpower the poor dope. But not before Sovak reveals something that Vash would have preferred to keep secret: Sovak isn't just an associate. He paid Vash to steal the disk and deliver it to him. Vash assures Picard that it didn't happen quite that way: yes, she took Sovak's money, but she used it to get to Risa and look for the artifact herself. She has no intention of handing the artifact over to him. Picard disapproves, but he's also impressed that she was able to out-con a Ferengi. As they make camp for the night, Vash points out that Picard should actually thank her; he's clearly enjoying this excitement a bit more than just sitting in the sun with a book. Picard doesn't disagree. And maybe he and Vash have a little bit more fun to have tonight...

The next day, they arrive at the probable resting place of the Tox Uthat. As they prepare to dig, the Vorgons beam in to witness, and Vash gets pissed that Picard never told him that he plans to turn the artifact over to them. Unfortunately, right about now an armed and pissed-off Sovak turns up. Vash attempted to destroy the data disk before they set off, but Sovak was able to salvage it and track them down. He orders them to keep digging, prepared to take possession of the artifact and kill them once they find it.

Hours of fruitless digging later, Picard throws down his shovel. The Tox Uthat is clearly not here. Sovak is skeptical, but Vash has to agree. They would have found it by now if it was here. The Vorgons (now why didn't they do anything when Sovak showed up?) beam out, looking to check their research notes again. Picard and Vash get out of the pit and walk away as Sovak has a meltdown.

Back at the resort, Vash is dejected and asks to be alone. But Picard's having himself a thought—and by convenient happenstance, the Enterprise has just arrived in orbit to pick him up. He instructs Riker to be prepared to initiate "Transporter Code 14" at his signal, then he goes down to the lobby to wait for Vash.

Sure enough, a packed and checked out Vash appears, and Picard confronts her. He's figured out her plan. Vash deliberately failed to destroy the data disk; she wanted Sovak to follow them, and see for himself that the Tox Uthat wasn't there, so that he'd believe Estragon's research was wrong and leave them alone. And the reason that the Tox Uthat wasn't there... was because Vash already dug it up long before Sovak even caught up with her. Vash admits it, and shows him the Tox Uthat—and that's when the Vorgons beam back in, ready to take possession of it. When Vash realizes that these aliens are Vorgons, she's immediately suspicious. According to Professor Estragon's notes, the reason the scientist who built the Tox Uthat hid it in the past in the first place was to hide it from two thieves. Two Vorgon thieves. Their cover blown, the Vorgons zap Vash with some kind of stunner weapon and try to take the artifact by force. But Picard has one more card to play: attaching his communicator to the Tox Uthat, he calls the Enterprise and calls down the Code 14, which destroys both his communicator and the artifact it's attached to.

Defeated, the Vorgons admit the truth. According to their history books, Jean-Luc Picard didn't just find the Tox Uthat, he destroyed it. Their attempt to alter history and get back the weapon they were trying to steal has failed. They beam away, never to be seen again.

In the aftermath, Vash and Picard go their separate ways, amicably. Picard heads back to the Enterprise, refreshed and threatening to have a chat with Riker about that whole horga'hn business. He doesn't tell anybody about his adventure, though; all they know is that he clearly had a great time.

Tropes featured in "Captain's Holiday" include: