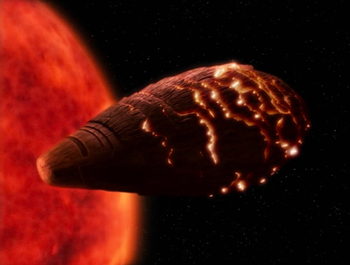 The titular "Tin Man", which looks more like a cross between a garden bulb and a sweet potato.
Advertisement:

While on a routine assignment, the Enterprise is suddenly approached by the USS Hood, captained by an old comrade of Picard's (who also happens to be Riker's former CO, as established back in "Encounter at Farpoint") who informs him that the Enterprise has received new top-secret orders involving a time-critical mission. Due to security concerns, they will be briefed by the Betazoid mission specialist, Tam Elbrun. Riker immediately bristles at the name due to Tam Elbrun's involvement in the "Ghorusda Disaster," which resulted in the deaths of 47 Starfleet personnel, including two of Riker's former classmates. Troi knows Tam from her university days and reveals that he was once one of her patients, which does not sit well with the rest of the crew.

Tam is a gifted telepath even by Betazoid standards. Brusque and aloof, he skips to the end of every conversational exchange using his telepathy "to save time" and unceremoniously hands Picard his orders. He's much more friendly to Troi, however, but he's even more fascinated by Data. As someone whose mind he cannot read, Data offers him a unique opportunity to get to know someone. That said, he urges the crew to convene in 15 minutes for his briefing.

Tam explains that 23 parsecs beyond any previous manned mission, deep in the Beta Stromgren system, a life form code-named "Tin Man" has been discovered orbiting a collapsing star, but all subspace attempts at communications have failed. Tam, as Starfleet's top expert in first contact with unknown life-forms, will attempt to telepathically communicate with it. Complicating matters is the fact that Tin Man is in a sector claimed by the Romulan Empire, which has sent their own ships in an attempt to get to Tin Man first, making this a race. At the end of the meeting, Tam confronts Riker about his bitter feelings over Ghorusda, but Riker is unmoved.

En route to Beta Stromgren, Picard holds a meeting with Crusher and Troi over his concerns about Tam's stability. Troi explains that Tam was born telepathic, which is unusual for a Betazoid and means he cannot turn it off at will. His unusually powerful abilities cause him to be constantly bombarded with other people's thoughts. In spite of the therapy he receives to cope, he's become a miserable recluse. Later, Tam vents to Troi about his issues and lets slip that he's already been in mental contact with Tin Man, which is why he's volunteered for this assignment against his natural inclination.

The ship's sensors have been picking up a weird "echo" matching their speed and course. At 18 minutes away from Beta Stromgren, the echo reveals itself to be a cloaked Romulan Warbird, which cripples the Enterprise as it passes. Tam reads the enemy captain's mind and reveals that the attack was solely to delay the Enterprise and get to Tin Man first. The gambit works: Picard orders that they repair their shields before continuing, surrendering first contact to the Romulans.

In the mean time, Tam visits Data, who's using the opportunity to study Tin Man further, He says that Tin Man is probably a Living Ship but lacks a crew. He wonders whether Tin Man was bred for that purpose or if it adapted itself to serve a purpose. Tam and Data then get philosophical about the purpose of anyone's life, organic or android. Tam shows great respect for Data and assures him that, even though he can't read his mind, his thoughts are no less valid than anyone else's.

When the ship finally reaches Tin Man, the Warbird is preparing to arm its weapons again. Tam realizes that they're going to destroy Tin Man to deny it to the Federation. Tan reaches his mind out to Tin Man to warn it, and it releases a pulse of energy that obliterates the Warbird and damages the Enterprise. Confronted by Picard over his actions, Tam admits that he's been in stronger contact with Tin Man than he'd admitted. Its real name is Gomtuu, and it's the Last of His Kind. It journeyed to the dying star to commit suicide. Tam claims the only way to stop Gomtuu from killing itself is to go inside it. Troi is worried that Tam is losing himself in the merger of minds, so Data volunteers to go along with Tam to "anchor" him.

Data and Tam beam aboard Gomtuu. After a moment of distress, Tam claims Gomtuu has told him the story of his entire existence. He claims the crew and Gomtuu existed in a symbiotic relationship, hence Gomtuu's anguish at their loss. "Is that the purpose of existence? To care for someone?" asks Data. Tam says it is for him—and he doesn't plan on leaving. Tam will fulfill the mission by taking the crew's place and giving Gomtuu a reason to live again. Meanwhile Gomtuu will also save Tam: he is now finally free of the deluge of thoughts that plagued him through his life. Only Gomtuu speaks to him now.

Meanwhile, the other Romulan Warbird has arrived and plans to destroy Gomtuu in retaliation for the other ship. However, Gomtuu, now merged with Tam, produces another wave that safely pushes both the Enterprise and the Warbird several billion kilometers away, just in time to witness the sun go supernova. A shocked Picard calls out for Data... who is immediately beamed safe and sound aboard the bridge.

With the fates of Tam and Gomtuu left unknown, Data tells Troi that Tam asked Data to explain Tam's reasons for staying with Gomtuu and hoped she would understand. Data adds he saw something "remarkable": Tam and Gomtuu, two beings individually broken and isolated yet both healed when joined, with their grief and loneliness turned to joy and belonging. Troi is amazed at Data's insight and he adds that when Gomtuu beamed him back to the Enterprise, he realized that it's where he belongs.