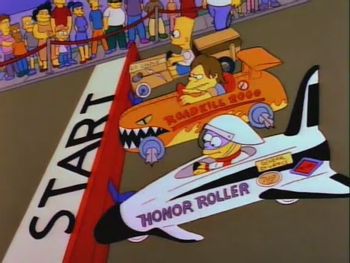 After failing a magazine test on being a good father, Homer decides to help Bart out with his Soapbox Derby race car — and soon is left out when Martin gives Bart his race car (after crashing into a wall and getting sent to the hospital) so he can win against Nelson Muntz. Meanwhile, Patty and Selma get their hair styled.

Skoie's two days from retirement, but not if Mendoza has anything to do with it.

Skoie's two days from retirement, but not if Mendoza has anything to do with it.