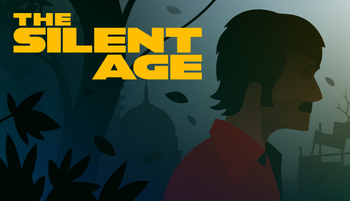 "…And now you're here. The harbinger of doom at my doorstep. Wearing a boilersuit."
— Dr. Lambert
Advertisement:

is a point-and-click indie puzzle game created by a Danish game studio House On Fire. There are two episodes to it, released in 2012 and 2014, respectively.

The story takes place in 1972 as the plot focuses around a guy named Joe, who works as a janitor at some grand corporation and is, quite literally, "your average Joe". The storyline is set into motion upon Joe's investigation of ominous blood splatters in the new areas he's been assigned to take care of, and his meeting with an elderly time traveller. The shot man insists that The End of the World as We Know It is about to happen, foists a mysterious device upon clueless Joe and entrusts him with a mission to find his younger self and warn about this unfortunate wound.

The thrilling captivating story, complete with spooky ambient soundtrack sets the player on a quest to discover the truth behind the extinction of mankind by means of Time Travel. However serious the storyline is, the game is not devoid of witty humor and the protagonist's sarcastic remarks on wrong moves. The clever puzzles, engaging mechanic and deep story fetched this game the 2013 Casual Connect Indie Prize.

The Silent Age contains examples of: