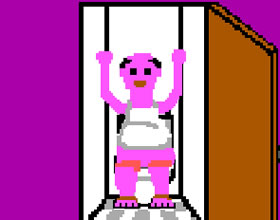 "The game hasn't even started yet, but you just couldn't help yourself. You just shit your pants. Game over."
Advertisement:

Don't Shit Your Pants is a humorous text adventure game by Cellar Door Games that jokingly brands itself as a survival horror game. It can be found on Newgrounds here.

As the name suggests, you play as a man who desperately needs to defecate and must guide him to the bathroom using text commands. There are ten different endings to unlock, and many of them require thinking outside the box. The game is short, and only takes a few minutes to complete, but getting all of the endings without cheating requires some thinking. Getting all of the endings will earn you the title of Shit King.

Has a Spiritual Successor in the form of Don't Wet Your Pants.

You spent all this time reading this page... You just shit your pants. Game Over.