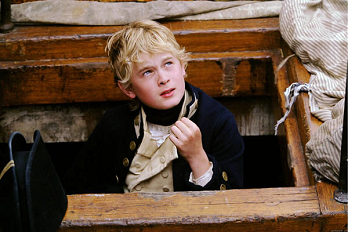 During the days of "Wooden Ships and Iron Men", midshipmen were apprentice officers. Most midshipmen started their naval careers at the age of 11 or 12, working on various ships while they learned seamanship, navigation, and the other skills an officer would need to lead a ship full of men. Most were the younger children of the landed gentry. In terms of authority, Midshipmen were considered the lowest ranking of all the officers on a ship, but regardless of age were treated as officers by the rest of the crew with all the responsibilities and authority that comes with it. (Ordinary seamen, on the other hand, might be as young as 7 or 9 depending on what sort of job they entered, such as The Cabin Boy—although not necessarily, as a man could enter the service as a seaman at any age.)

The word "midshipman" derives from the term "amidships", referring to the portion of the ship in which they lived and slept. During the 19th century training of naval officers in both the Royal Navy and the U.S. Navy changed toward formal schooling in a naval college as opposed to an apprenticeship aboard ships, and the term "midshipman" changed to indicate an officer cadet.

The Plucky Middie is thus a special kind of Child Soldiers commonly seen in rousing tales of the sea. This character will be found serving on a tall-sailed Man-o-War alongside the stouthearted crew, sailing into adventure. His existence allows the creator to combine a coming-of-age story with a period naval adventure. Plucky Middies are always, well, plucky. They always show tremendous initiative, and braver than brave, and though they endure hardships like bullying and bad food, they always rise to the occasion and sometimes find themselves in charge.

They seem to be quite prone to dying tragically, often to provide Collateral Angst for other characters over their untimely deaths.

The trope is perhaps the result of exaggeration by Victorian authors, who knew of course that a large part of their audience would be teenage boys who sucked up naval adventure stories as quickly as they could. This is likely the reason for a lot of romanticized portrayals of Child Soldiers in general.

This entire trope is Older Than Radio. Truth in Television: both Admirals Nelson and Farragut started out their naval careers as Plucky Middies.

See Space Cadet Academy for a more modern variant of this trope, especially when Recycled IN SPACE!.