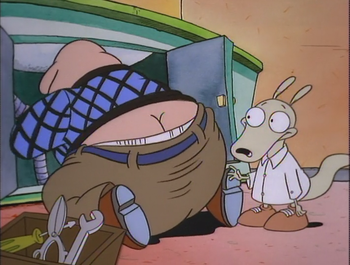 "Hey, could you get that? Thanks a lot."
Ramos: The pipes in our bathroom froze again. Why don't you deal with that?
Luschek: I'm not a plumber!
Ruiz: Our mistake. You've got that whole ass-crack thing going on, so...
(Luschek self-consciously pulls up his pants)
—Orange Is the New Black
Advertisement:

The Plumber Crack gag is a classic comedy staple. It is a situation in which a plumber or other blue-collar worker of similar ilk (in British English it is more often called a "builder's bum") bends to do some task and exposes their butt crack in the process to onlookers.

Common stereotypes of the Blue-Collar worker are their apparent lack of hygiene and personal fitness. Keeping in mind the principle of Show, Don't Tell, the (usually) overweight and hirsute character bends down to take a look at something, and their pants fall or get pulled below their waistline.

The Reaction Shot of the other characters is typically Played for Laughs. They might even use the opportunity to give a wedgie. Characters are often far more disgusted by the sight than similarly being "mooned". Compare Wardrobe Malfunction and Mooning.

Rocko took a "plumber's assistant" job where his only task being keeping the plumber's pants in place.

Rocko took a "plumber's assistant" job where his only task being keeping the plumber's pants in place.