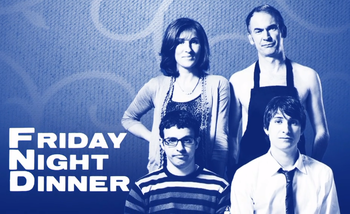 It's only Friday night dinner! What could go wrong?
Advertisement:

Friday Night Dinner (2011-2020) is a Channel 4 comedy television series. Once a week, the Goodman family meet up for a Sabbath meal on Friday night.

The family consists of snappy mother Jackie, half-deaf hoarding father Martin, and twenty-something sons Adam and Jonny. Hilarity Ensues as the whole night is filled with the brothers' constant war of attrition, Martin's Oddball nature freaking everyone out, Jackie's constant barking to get everything (and everyone) ready to eat, as well as the regular intrusion of the neighbour Jim.

All this combined into surprisingly elaborate Fawlty Towers Plots, which always collapse at the climax of the episode.

The programme ran for six series of six episodes each.* except series 2, which has a "Christmas" special that aired around the eponymous holiday.

On 28th May, 2021, a "Making of" Documentary for the show was released to celebrate the tenth anniversary of the show, with a foreword about Paul Ritter's death.

Not to be confused with Grandma's House, a similar show that aired around the same time, also part of the "dysfunctional Jewish family meets for a meal" genre of TV.`

The writers would then move on to make another comedy, I Hate You.