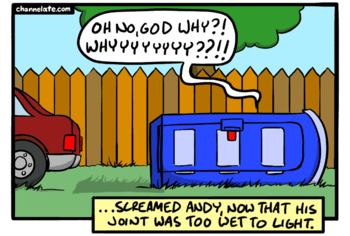 A wet joint is the least of his problems right now.
Advertisement:

A general rule of thumb if you go to a place like a concert or a park: if there are only portable toilets and no public restrooms in sight, then you should either just hold it until you get home or improvise, 'cause there's a chance that the port-a-potty will end up getting tipped over.

Tipping over port-a-potties and outhouses is a very common prank done by people who are looking for some laughs or are getting revenge on someone (although it can happen by accident, too). The offender will wait until their target goes inside, and then they will push the toilet onto its side, and sometimes, they'll tip it over on top of its door so that the user can't get out. The inevitable result is that the victim will be covered in waste, most of it not even being their own. Yuck...

Another variation is when the cover of the toilet gets destroyed or the walls fall down, which will expose the person using it to everyone who can see them, much to their embarrassment.

A form of Toilet Humour.