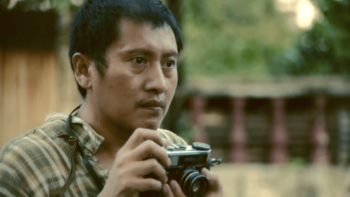 Anino is a 2000 short film (12 minutes) from the Philippines, directed by Raymond Red.

The main character is a photographer. He lingers in a church in Manila, hoping to get people to pay for pictures, but no one is—he hasn't eaten since yesterday. The photographer plods out of the church only to meet a man dressed in black, leaning against the door, who out of nowhere starts yelling at him for being an idiot and a loser. The man spends the day wandering around Manila, losing his camera through his own stupidity.

The scenes with the photographer are intercut with scenes of a second man, behind the wheel of a car, stuck in traffic and increasingly frustrated. Finally the driver gets out of the traffic jam and turns into an alley, only to encounter the photographer.