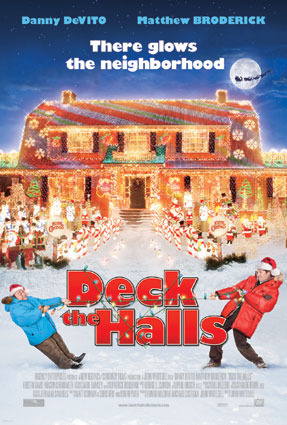 Deck the Halls is a 2006 Christmas comedy film directed by John Whitesell.

Matthew Broderick stars as Dr. Steve Finch, an eye doctor with a wife, Kelly (Kristin Davis) and two children, a teenaged daughter named Madison (Alia Shawcat), and a preteen son named Carter (Dylan Blue). Steve is adamant about his Christmas traditions, even to the point of it doing more harm than good for his family and everybody else involved. His Christmas tradition plans start spiraling down the tubes when his new neighbor, Buddy Hall (Danny DeVito) along with his wife, Tia (Kristin Chenoweth) and two twin daughters Emily (Kelly Aldridge) and Ashley (Sabrina Aldridge) move in to the only home just across the street. Buddy's daughters have discovered and shown him that you can view houses from space with a place called "My Earth" which is very much like "Google Earth." He is upset, though, that for some reason, their house doesn't appear, even though the Finches' house does.

It could be that their house has not been there very long and there never was a new satellite picture update taken of that place since. So, contrary to ones who would prefer privacy and that their homes remain unable to be captured by satellite, Buddy gets this obsession about wanting to get their house visible from space. So, as a result, he would have to garnish their home with Christmas lights. From that point on, because of how the bright lights and his whole showy Christmas display he goes as far as gets to Steve and even worse disrupt his intended Christmas traditions, things go for the worse between Buddy and Steve even to the point of practically wrecking their relationship as new neighbors. And much to their annoyed wives the only question is will they ever be able to patch that up?

Deck the Halls provides examples of: