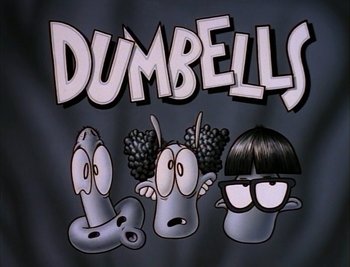 The Three Stooges are one of the most popular comedic ensembles of all time, especially in the United States, where they are virtually an institution. In the rest of the world their popularity and fame are not as huge as Laurel and Hardy.

But a sure sign of the tremendous effect they had on popular culture is that most American films, comic strips, animated cartoons and TV series will feature a Three Stooges shout-out at one point. Most of the time their typical catch phrases and sound effects will be uttered ("Nyuk, nyuk, nyuk", "Wiseguy, eh?", "You numb chucks", "Soitenly", "Woob Woob Woob", "I'm a victim of circumstance", "You knucklehead",...) and three characters will mimic typical Stooges shticks by starting to bicker and hit each other with typical nosetwirls, pokes-in-the-eye, a hollow sound whenever a head is hit,...