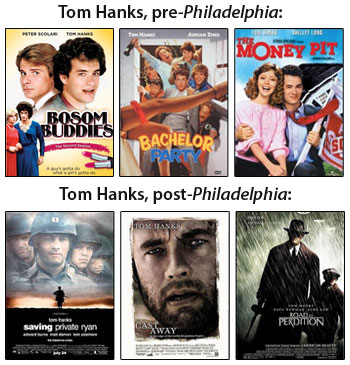 The casting opposite of Leslie Nielsen Syndrome. It's a story found time and time again: a successful comedian, usually a film actor, suddenly tries to play against type and stars in a big, heavily dramatic movie, playing a dramatic role and generally acting all dramatic. Oddly enough, this shift has a pretty high chance of actually working, and becoming a permanent shift in the actor's roles.

The first question a viewer might have would be, "Why does this happen so often?" Well, As You Know, True Art Is Angsty. Many comic performers begin to feel they cannot get the acclaim and respect their dramatic counterparts do unless they start doing more dramatic films. In addition, comedic films almost never win Oscars, leading stars to resort to more dramatic fare. It's instructive that most examples are film stars, since television's Emmys have separate categories for comedy and drama.

The second would be, "You say this has a good chance of working. How can that be true?" Well, what most non-actors aren't aware of is the fact that comedy is more difficult to act in successfully than drama. A mediocre performance is much more readable/watchable in a drama than in a comedy, because once comedy starts to fall apart, it's very hard to pull it back together again. Hence, a sufficiently good comic actor usually has the talent — the knowledge of their body, of timing, of the effects of subtle gestures — that can serve to make them brilliant at serious works as well. In some cases, when an actor does this long enough and successfully enough, they can become better known as a dramatic actor than a comedic one (just look at the Trope Namer).

Compare Cerebus Syndrome, where a series does this rather than an actor. As the examples below show, this doesn't always work well, but when the actor in question manages to do a really good job, it can lead to a surprised reaction: He Really Can Act! Contrast Leslie Nielsen Syndrome, where a successful drama actor becomes an equally successful comedian. Can be related to Comedy Ghetto.

When including examples, don't add natter saying they weren't funny in the first place.