Video Game / Quest for Glory I 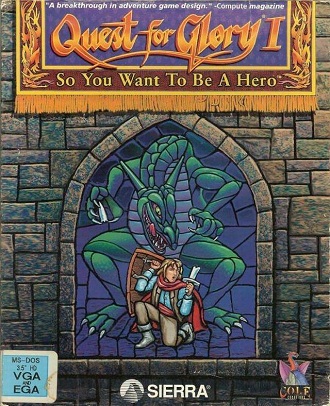 Quest For Glory I: So You Want to Be a Hero? (formerly called Hero's Quest), is the first entry in the Quest for Glory series of games. Your character, the latest graduate of the Famous Adventurer's Correspondence School, answers a newspaper ad from the valley of Spielburg, which is in dire need for a hero, "No Experience Required".

The local Baron was once a great protector of the people of the valley, but after crossing the ogress Baba Yaga she cursed him to lose all that he holds dear. Sometime afterward, both the Baron's son and daughter went missing, and in his grief and despair the Baron has virtually abandoned his duties and holed himself up inside the castle.

As a result the valley has become a nearly lawless ruin, bandits prey on any travelers and merchants, monsters run unchecked in the wilderness, and your adventurer just barely made it into the valley before a blizzard sealed off the eastern mountain pass. Now It's Up to You to break the curse while taking on the brigands, monsters, a magic wielding ogress that likes eating heroes, (and we don't mean sandwiches) and the dreaded Antwerp.

The game is set in a backdrop of Germanic and Norse mythology, (with a few exceptions, most notably the Katta innkeepers Shema and Shameen and the merchant Abdulla Doo, all three of whom are visiting from their native Arabian Nights themed land of Shapeir, the Greek Centaurs and Minotaur, and the Slavic Baba Yaga) and later received an Enhanced Remake with VGA graphics.