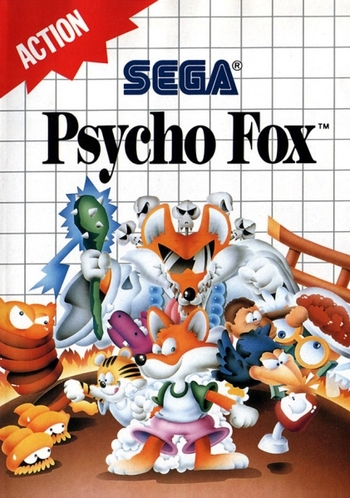 Developed in 1989 by VIC Tokai and released by Sega for the Sega Master System, Psycho Fox is often considered the Master System's answer to Super Mario Bros., as it takes more aspects from said game than the more famous Alex Kidd in Miracle World, while still being different enough to be considered a Cult Classic in some cases. The game was based on the NES title Kid Kool, but refines many of the problems present in said game.

The player controls a Kitsune who has the ability to transform into other animals (a monkey, a tiger and a hippo) in order to put an end to the turmoil that the evil Madfox Daimyojin has caused to the world.

A Sega Mega Drive game using the same engine and formula was released under the title Magical Hat no Buttobi Tabo! Daibōken, which was localized as Decap Attack in the west.