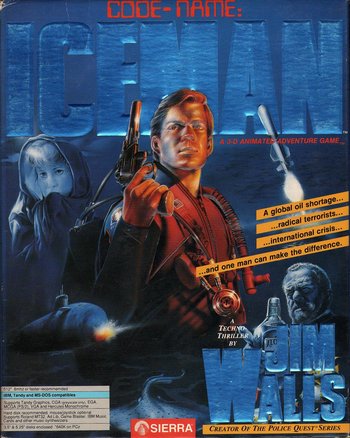 The Cold War just got colder.
Part adventure and part submarine simulator, this 1989 Sierra adventure from the mind of Police Quest creator Jim Walls puts you in the shoes of a multi-qualified Commander in the United States Navy, during the late stages of the Cold War. A hostage situation at the U.S. Embassy in Tunisia threatens to flare up into open conflict with the Soviet Union, enough to merit taking a Los Angeles class nuclear submarine from Hawaii into the Mediterranean, only to bring you (supposedly a part-time CIA operative or somesuch) ashore for a rescue operation.
Advertisement:

The story begins in Tahiti, where your character is taking a leisurely vacation. The game's copy-protection requires you to follow precise CPR procedures to rescue a drowning woman. You later meet and spend a night with a beautiful American woman who later turns out to be a CIA agent.

You are called back from vacation to the Pentagon, where a briefing reveals the basic plot. You're then flown directly to Hawaii to board the submarine. The majority of the game is spent on the sub, and you'll be required to handle a great variety of functions on board:

The underwater journey requires playing several long minigames, some of which are devastatingly hard to complete. This includes a battle against Soviet cruisers, battle against a Soviet Alfa-class Submarine, and piloting the sub between icebergs/stalactites underneath the north pole.

In addition, the game requires you to win several games of Yahtzee against a fellow shipmate to win a bottle. The designers were particularly devious with this one, as saving and reloading too many times during this game will cause you to lose the match automatically (apparently, your opponent is quite smart). Doing this makes the game Unwinnable. In fact, there are at least two other places in the game where a wrong action does not immediately cause a Game Over, but rather lets you play on for quite some time, oblivious to your Dead Man Walking status.

After reaching Gibraltar, you will disembark from the ship using scuba gear, evading shore defenses by creating a diversion. The actual assault on the embassy at the end of the game is possibly even harder than the rest of the game, and requires quick thinking and reflexes.

This is possibly one of the most difficult Sierra adventures ever created, mostly due to the many difficult mini-games as well as the general obscurity of its puzzles, leading to Guide Dang It!. However, the plot and writing, as well as its relative innovations at the time it was released, made it either very worthwhile or simply a piece of crap. Unfortunately, the multiple copy protection techniques (most of them requiring the original manual or a reasonable facsimile) as well as unexpected bugs render this game virtually unplayable today.