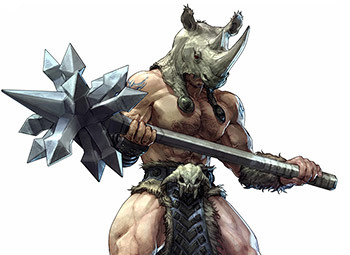 Speaking softly is optional.
"To be honest, all you need to use is, at best, a big heavy object. I stick to the axes because that's my style, but I was halfway tempted to just find a big piece of tree."
— Byron the Berserker of Guilded Age, on the subject of dealing with kobolds

Perhaps the first weapon of war that humanity has mastered (besides their own two fists), the good old-fashioned club simply consists of picking up a stick (or bone) and whacking something with it. Though the quality of these clubs has advanced over time, from crudely carved pieces of wood to the finely-made flanged mace, the general principle of bashing something over the head remains. A sword isn't cut out for slicing through heavy armor, but a well-designed bludgeoning tool will leave a sizeable dent and break any bones underneath. Do not underestimate the simple stick.

Nowadays, maces and clubs tend to find use with two main groups of warriors; big, powerful bruisers like The Big Guy or the Mighty Glacier, or Technical Pacifist types like High Fantasy priests and clerics who want something to defend themselves with without shedding blood (though anyone who's seen one of these in action knows that these weapons, particularly the heavier ones, are just as capable as bladed weapons of leaving a bloody mess, not to mention all the damage the force does to internal organs).

The hammer is probably the most popular form of bludgeon in fiction; see Drop the Hammer for examples of those. Also compare the more finesse-oriented Simple Staff and the improvised Batter Up!, Crowbar Combatant, and Rolling Pin of Doom for other types of clubbing weapons, as well as Primitive Clubs for when the use of these weapons is used to denote primitiveness and unsophistication. For literal cases of a ''big stick'', often used as a pole-arm, see Telephone Polearm. Spiked maceheads are very common for more violent characters to emphasize their brutality. Combine it with Whip It Good and you get an Epic Flail. Putting a blade on the stick gives you, well, a Blade on a Stick. Pipe Pain is a common way of improvising a big stick in modern times, as well as 2xFore, in which the bludgeoning weapon is a wooden board/plank or any kind of wooden construction material. A common modern version of the big stick is the Lawman Baton.

Not to be confused with Gunboat Diplomacy, which is a metaphorical Big Stick Trope Namer Theodore Roosevelt meant.

The signature weapon of the Tusken Raiders, Boba Fett flawlessly wields it in battle against a fireteams worth of Imperial Stormtroopers.

Example of:
Drop the Hammer

The signature weapon of the Tusken Raiders, Boba Fett flawlessly wields it in battle against a fireteams worth of Imperial Stormtroopers.