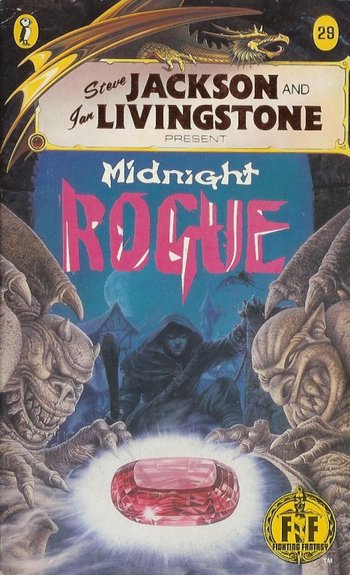 Midnight Rogue is the 29th entry in the Fighting Fantasy series of gamebooks, written by Greame Davis.

Port Blacksand is infamous for, among various things, the abnormal number of crafty rogues living in it. Well, you're one of them, or, at least, close to join their ranks. As an apprentice of the Guild of Thieves, you're ready to undertake the final test which will allow you to become a proper guild member: the Guild's leader Rannik orders you to find the Eye of the Basilisk, a priceless gemstone bought by the merchant Brass and hidden somewhere in the city. In the timespan of a single night, you alone must find out the location of this treasure and get your hands on it. However, Port Blacksand is a treacherous and dangerous place, even for a skilled rogue such as you. There's no guarantee that you will survive the mundane and magical perils on your quest for the Eye.

Midnight Rogue features the return of Port Blacksand after City of Thieves, and this time, rather than a heroic swordsman or mage, you play the role of a thief who can count on a sharp sword, items and a list of skills, including Lockpicking, Climbing and other roguish skills. Also, the adventure takes entirely place in an urban environment, having you exploring buildings, rooftops and dungeons across Blacksand, solving riddles and finding both items and clues in order to proceed on your quest. Also unusual in the fact that it's one of the few books lacking a Big Bad figure of sorts.